“Please don’t let them build homes on the mountain,” was the general comment given by every resident who chose to speak at an Oct. 8 Herriman public hearing on proposed development on the western Traverse Ridge above Herriman.
The council room was packed and overflowing into the break room and halls. Attendance may have peaked due to a notice that the city sent to every home in Herriman. But that fact doesn’t undermine the passion that each person came with.
At the outset, Mayor Carmen Freeman cautioned the audience that even though the council was very interested in what they had to say, he hoped they would be respectful and keep in mind that the land they were discussing was owned by people who are permitted by law to develop their land if they choose.
“It’s very easy to look at those mountains and think we have ownership of them, but we don’t,” Freeman said. “We will do what we can to preserve them if that’s the direction the community would like to go.”
There are several neighborhoods being discussed, some with plans in place and others in the beginning stages. 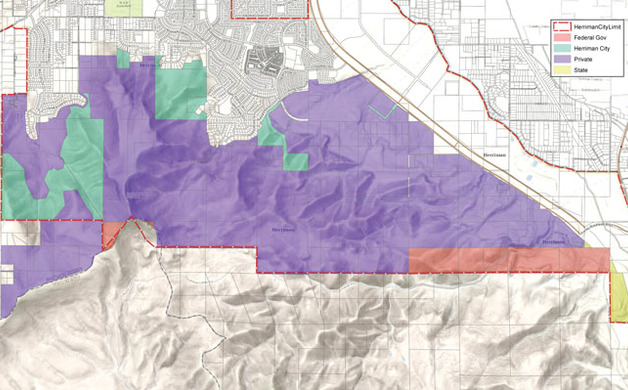 The proposed development that will make the greatest impact to the mountain is the Sky Village development, formally known as Deer Island. The new land owner, Utah Lowe Properties, would like to develop 496 acres in the area. John Lowe, who purchased the property in April, is planning a 496-unit neighborhood. No apartments are being proposed, but townhomes have been mentioned.
The land is currently zoned as forest residential which allows for an average of one unit per acre. State law gives Lowe the right to build this development as soon as he satisfies all code requirements. One of the first he must meet is to have two access points. These roads have to meet certain grade requirements so that public services such as emergency apparatus and school busses can safely access the area.
There are a few options that have been suggested, all of which would either need the council’s approval to construct roads on city property and/or a waiver of the 30 percent grade ordinance. 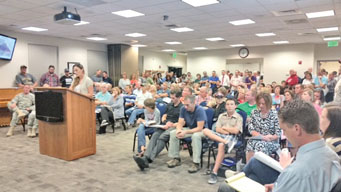 Although the city has not been formally asked for access or special allowance on grade, it does not appear that the council would likely grant it. They are concerned about possible impact to Herriman residents through higher service fees in the future, they say.
“I’m not in favor of crossing 30 percent slopes,” Councilmember Coralee Wessman Moser said.
This would mean Lowe must find other access options.
City officials say they will not do anything to impede development, but they are not likely to help solve the problems he may face.
“We will not treat this developer any different than other developers. We will respect his rights,” Freeman said.
One of the council’s biggest concerns is that the city could end up going through a similar predicament to that Draper City experienced with the development of the east side of the same Traverse Mountain Range, called Suncrest. That development faced much litigation and developer bankruptcy.
City officials also expressed misgivings about whether the developer can make a profit after the costs to bring the required infrastructure to the area, which, at a broad estimate would be several million dollars, they say.
They are concerned that part way through the project, Lowe would run into financial trouble and abandon the project, leaving a scarred mountain and a huge project for the city to finish. This could also add a huge financial burden to the city if the economy faltered and banks started failing again, they said.
“I think it’s an economic disaster. There’s no way he’s going to build two roads at 66 feet wide. He’ll end up destroying the mountain.  And we’re not even talking about getting water and sewer up there. He’s a nice guy, but he’s just going to be throwing money away,” Freeman said.
City leaders are also worried about the added cost for the city to provide public services to the area. Because of its remote location, services such as water, sewer, snow removal and school bussing will cost more per home than the average service. In Draper, Suncrest has a special service district tax to help alleviate that burden to the rest of the city. But residents there are fighting what they feel is excessive assessed taxes in the area in a ballot initiative Nov. 4 (after press deadline).
A year ago the Herriman City Council asked Kami Greengage Jones to form a trails committee. The committee was to study the needs and options of the Herriman Hills (or western portion of the Traverse Mountain Range).
Prior to public comments being given, Jones gave a report suggesting that the council study and be prepared to purchase land on the mountain when it becomes available.
“We built a group of volunteer citizens from the ground up. We have had a world-renowned expert come in and train us. We’ve educated ourselves about industry standards. We’ve talked to many property owners, and we’ve received feedback from a large number of residents. I can assure you that the recommendation I read tonight was conceived after countless hours of careful thought, study, assessment, discussion and planning,” Jones said.
The committee’s recommendation is to prepare financially to purchase the mountains and preserve them with some added improvements for camping, hiking, trail running, horseback riding, rock climbing and even a rope tow for tubing.
Jones made it clear that the committee has complete respect for the landowner’s rights.
“We recognize that they cannot and should not be forced to do anything with their property that they do not want to do. While not every property owner is currently interested in selling their land, there is definitely interest in working with the city for resolution on land use or purchase,” she said.
“You can pay to look at a mountain covered in homes or you can pay to preserve the mountain,” she added.
Preliminary ideas suggested by the committee would be implementation of a $5 to $10 per month fee per residence to be set aside for the sole purpose of land purchase within a defined geographic area.
City officials estimate the entire purchase price of the land could be somewhere in the region of $60 million, but no one really knows yet because the portion(s) of the mountain range to be purchased have not been determined.
The next step is for the trails committee to give a more formal, complete recommendation of exactly which areas of the mountain they would like the city to take an interest in purchasing. “The mountain” can have a different definition to many people.
Areas that already have some infrastructure available would be considerably more expensive (like the third of Herriman Springs Cove yet to be developed) and may not be the best use of taxpayers’ funds.
Then the city would need to fund a financial study that would determine how much of the property the city would plan to purchase and how to fairly distribute the costs among the city’s residents.
The last step for the committee would be to get an initiative on a future ballot so that the residents can decide for themselves if they wish to invest in keeping the mountain as open space.
News, Local Life